What To Expect From Your Investments

Recently, a friend inquired with me about the quality of advisement he was receiving on his investments.  He uses a conventional investment firm, a household name in the financial services industry, and pays an assets under management charge.  He is clearly familiar with the concept of using low-cost index funds, however has opted to use an advisor to generate returns that are greater than what he could get with a portfolio of low-cost index funds.

Since he asked for my opinion (I rarely talk investments with Family or friends), I told him that he should leave his advisor and index his mix and provided some comments on why I believe that would be the best approach.  While he is not ready to make this change I think he has a better sense of an alternative approach he can take which would be much more low cost and simplified.  In the course of our e-mail and phone discussion, he shared with me the e-mail chain with his advisor.

It was a good exchange about the approach that they were taking.  However, I found two explanations to be bogus and discouraging, though quite typical.  The first was simply an explanation that 2014 was a hard year for investors to outperform due to unusual issues and circumstances. Really?  Couldn’t that be said about almost any year?

The second was more troubling.  My friend had taken a portion of the portfolio and decided to be more “aggressive” with it.  Obviously, the intention was to generate higher returns.   However, as is the case many times when an investor does something like this, the returns were not satisfactory so far.  The advisor suggested that they give it a few more months or until the end of the year to see what happens and evaluate.  I can tell where this is going.  This approach is destined for failure.

You cannot micromanage a long-term strategy on a quarterly or even annual basis.  The advisor is creating a trap for himself.  If he has established the notion with the client that they can “juice up” returns in the short run with certain investments, and the client expects that, I see almost no scenario where this ends well.  ”Aggressive” investments, whatever they happen to be, simply do not behave this way.  More than any other type of investment, they need to have a very long-term time horizon for success.  If we could all get get better returns with more aggressive investments, wouldn’t we just use aggressive investments for everything?

But there are no end to advisors that will imply that they have these type of opportunities! 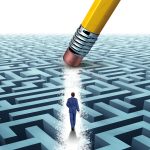 Avoid the Maze – Do Your Plan in 30 to 45 MinutesUncategorized